You are here: Home / Archives for Consumers Union

Consumers Union, the advocacy division of Consumer Reports, today called on companies developing automated driving systems, including Uber and Waymo, to take a safe and transparent approach to the testing and commercial use of self-driving vehicles. Crashes involving Uber and Waymo vehicles occurred recently during testing on public roads. Uber’s crash led the company to […]

Consumers Union, the advocacy division of Consumer Reports (CR), called on Tesla to move quickly to improve the safety of its “Autopilot” driver-assist system and to publicly release the detailed data behind the company’s safety claims. The company recently acknowledged that this technology was engaged at the time of a recent fatal crash in California, […] 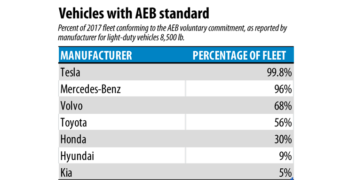 Toyota leads major vehicle manufacturers on number of vehicles with over 56 percent of its 2017 fleet, 1.4 of 2.5 million vehicles, with accident avoidance feature. Four of 20 automakers report that automatic emergency braking (AEB) is standard on more than half of their 2017 model year vehicles, the National Highway Traffic Safety Administration (NHTSA) […]

Concerns regulators bowing to industry on data collection through third party. Consumer groups are calling on the National Association of Insurance Commissioners (NAIC) to disband its five-year old Working Group on Auto Insurance after the organization’s Auto Study Group following a decision over the weekend by the group to accept an industry plan covering data […]