You are here: Home / Archives for Collision Repair Industry Production 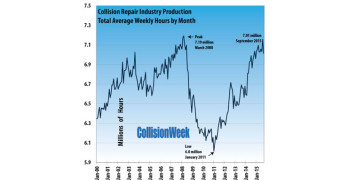 Both production employees and hours worked declined compared to August. However, production remained above 2014 levels. An analysis of the latest data released from the U.S. Department of Labor Bureau of Labor Statistics (BLS), shows that total production for the auto body repair industry was down in September compared to August, but above September 2014. […]