You are here: Home / Research / Percentage of Collision Repair Facilities Reporting Improved Sales Compared to Last Year Up in October

A larger percentage of collision repair facility operators report business improved in October on a year-over-year basis compared to those reporting higher sales the previous month. The percentage reporting higher year-over-year (YoY) sales increased to more than three out of five respondents overall. Collision repair facilities reported higher sales across 62.5% of respondents in October, up from 50.1% in September, but down from 66.7% in August. The highest level occurred in May at 72.0% of respondents when compared to the weak sales during May 2020 at the start of the pandemic.

The percentage of respondents reporting lower sales in October compared to last year, at just 15.6% was lower than September’s result of 26.8%, 18.2% in August, and 16.2% in July. The low was 10% reporting lower YoY sales in June.

The best performance had been a 22.3% increase in May compared to the pandemic impacted sales the previous year that had been down 38.6% versus 2019.

Respondents continued to mention the combined effects of the resurgence in the coronavirus cascading across different regions of the country in early fall impacting the return to work and driving lowering demand. Continuing staffing shortages at shops combined with automotive parts shortages are also impacting the ability to produce the work repair facilities do have, also impacting overall sales.

While driving has returned to near pre-pandemic levels nationally, respondents continue to cite the reduction in rush hour traffic as a key driver of lower sales that they believe outweighs the benefit of the re-opening of the economy. 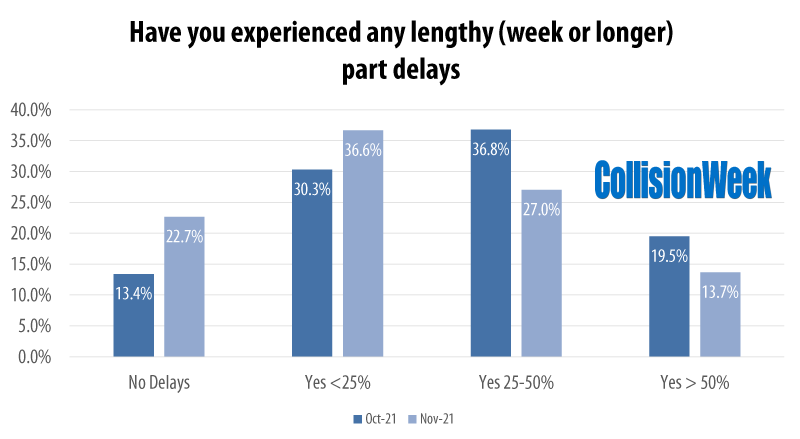 Overall, the OEM parts situation is improving, but is still severely impacted due to the supply chain crisis.

Asked if they had experienced any lengthy, week or longer, part delays from their OEM suppliers, 22.7% of respondents reported that repair orders (ROs) were not impacted by lengthy parts delays. This is an improvement from just 13.4% of respondents who indicated ROs were not impacted by lengthy parts delays in October’s research. Those respondents that reported they were experiencing parts delays of a week or longer across less than 25% of their ROs increased to 36.6% in November from 30.3% in our October study. Those that reported parts delays across 25-50% of repair orders declined to 27.0% in November compared to 36.8% in October. Those reporting more than more than 50% of repair orders had lengthy delays also decreased to 13.7% from 19.5% in October..

This month we also asked about delays sourcing non-OEM parts. 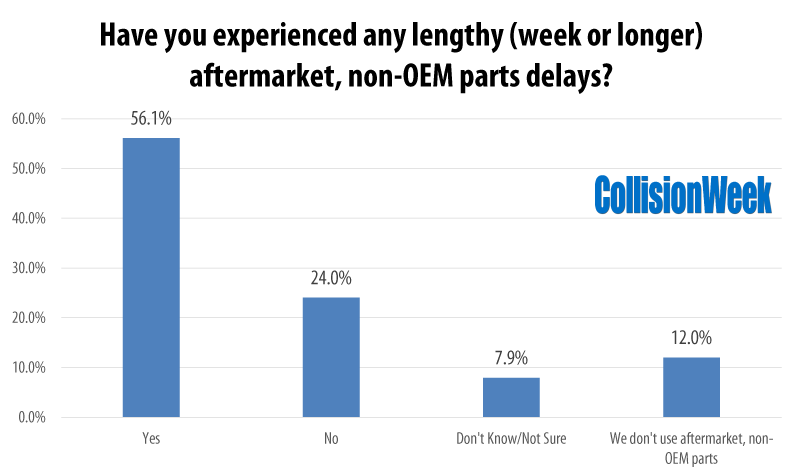 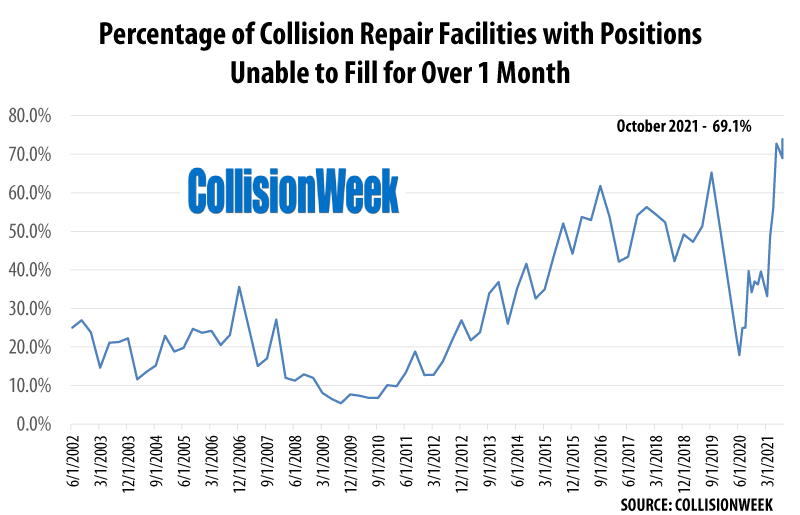 Looking at unfilled positions, however, continues to indicate that employment would be even better if repair facilities could find the employees they are seeking. A near record 69.1% of respondents reported having positions that they have been unable to fill for more than one month, down from the record 73.9% of respondents reported having positions in September, up from 69% in August, but down from 71% in July and 72.7% in June.

Last October, just 34.2% of respondents reported having positions they were unable to fill for more than a month. The historical average is 31.4% since we began including this question in 2001.

Asked if they planned to hire additional technicians in November, 72.4% said yes, up from 60.9% in October, 71.4% in September, and from 60.7% who said yes in August. This is up dramatically from the 0.7% that said they planned to hire technicians in February during the winter wave of coronavirus infections and winter storms that disrupted electricity supply in many southern states.

For the seventh straight month, no respondents reported plans to lay off technicians in November, a reflection of the concerns over technician availability.

Collision repairer optimism declined somewhat in November compared to October, but was above September’s result.

Asked if business would be better in six months, 37.5% said yes. The November result is down from 46.2% in October but is up from 33.3% who said yes in September, but down from 48.7% in August and 60% in July. In May, as vaccines rolled out and prior to the resurgence in the coronavirus due to the Delta variant, fully 70% of respondents believed business would be better in six months.

The previous record was 47.6% who expected better conditions in our third quarter study in 2003.

However, a positive sign is that the percent of respondents who said business would be worse in six months also decreased to 15.6%, down from 30.8% in October, but up from 6.1% in September. The October result is above the average of 14.1% since 2001. The previous record was 35.4% in the first quarter of 2008 in the early stages of the Great Recession.

Those with a negative view of business cited concerns continued to cite inflation and the impact of proposed governmental programs and higher business tax proposals impacting the economic recovery, labor costs and supply prices.

Comments also mentioned that insurance companies have been slow to increase labor rates while labor costs have been increasing.

The declining optimism about business conditions has started to influence collision repairers’ views on the opportunity to expand in our most recent study compared to last month. Asked if the next three months would be a good time to expand, 38.7% said yes, down from 44% who said yes in October, but up from 34.4% in September and dramatically up from 16.7% in February and from 15.9% in January at the height of the winter surge in the coronavirus pandemic. The November result is below the 55.4% who said it would be a good time to expand in June, the highest since the start of the pandemic and is above the average of 22.1% in our quarterly surveys conducted since 2001.