Three out of four of the electric vehicle battery fires they investigated reignited in the towing storage facility. Safety recommendations say vehicles should be separated by 50 feet when stored or separated by physical barriers from other vehicles.

Of concern for the collision repair and towing industry is that the NTSB found that three out of four of the electric vehicle battery fires they investigated reignited in the towing storage facility. 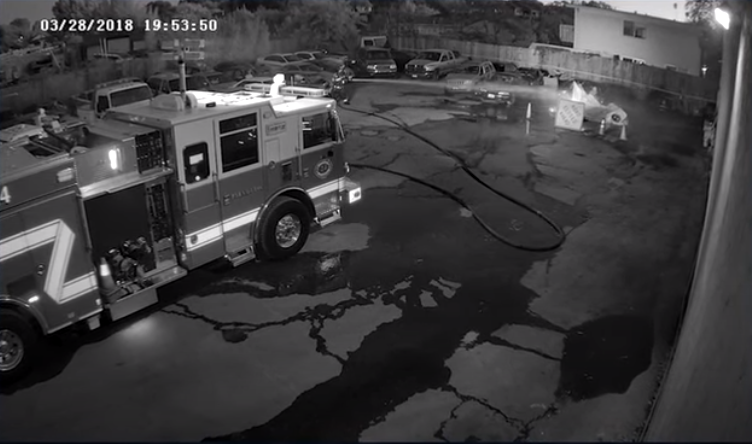 The NTSB video summary of its report showed CCTV footage of firefighters putting out a battery fire that reignited in a towing company’s storage yard in Mountain View, Calif.

Safety issues with the high-voltage, lithium-ion batteries used in electric vehicles first gained widespread attention when a Chevrolet Volt caught fire three weeks after a crash test in May 2011.

The video embedded below summarizes the report released by the NTSB yesterday.

Fires in electric vehicles powered by high-voltage lithium-ion batteries pose the risk of electric shock to emergency responders from exposure to the high-voltage components of a damaged lithium-ion battery. A further risk is that damaged cells in the battery can experience thermal runaway – uncontrolled increases in temperature and pressure – which can lead to battery reignition. The risks of electric shock and battery reignition/fire arise from the “stranded” energy that remains in a damaged battery.

According to the NTSB report, ” Firefighters who participate in the initial emergency response and tow truck drivers who move a damaged electric vehicle from the scene can all be exposed to the risks of stranded energy. Storing an electric vehicle with a damaged high-voltage lithium-ion battery is an additional problem.”

The battery fires investigated by the NTSB reignited multiple times, even days after a crash, placing other vehicles and nearby structures at risk for fire. The Chevrolet Volt that reignited 3 weeks after a crash test damaged four nearby vehicles.

According to the NTSB report, the National Fire Protection Association (NFPA) and vehicle manufacturers recommend leaving a 50-foot clearance around a stored, damaged electric vehicle to prevent fire damage to nearby vehicles or structures in case the battery reignites.

Guidance in SAE J2990 gives an alternate solution: create a barrier of earth, steel, concrete, or solid masonry around the vehicle.

The report raised issues with vehicle manufacturer guidance documents on the safety risks stating, “The guidance documents generally limit their advice to calling the manufacturer for instructions or leaving at least 50 feet of clearance around the vehicle. The NTSB considers that advice impractical at best. Given the SAE’s recommendation to also consider isolating a damaged electric vehicle inside a barrier of earth, steel, concrete, or masonry, manufacturers might consider including such an alternative in their guidance.”

In the report, the NTSB also urges vehicle manufacturers to include in their emergency response guides information specific to each vehicle so that firefighters and tow truck drivers can efficiently and safely act in emergencies involving electric vehicles that are powered by high-voltage lithium-ion batteries.

Actions sought by the NTSB in the four safety recommendations issued Wednesday include: