Lemuel Douglas “Doug” Middleton, a long-time staff member and volunteer at the Inter-Industry Conference on Auto Collision Repair (I-CAR), passed away May 19 at the age of 97. Middleton was born January 27, 1923 in Clay County, Illinois on a farm between the towns of Xenia and Iola to Mark Middleton and Nina (Gullett) Middleton. He was the first surviving child of that marriage. He was preceded in passing by his sister Phyllis, brothers John, Joseph, Robert and his wife of 73 years, Agnes (Jaeger) Middleton. 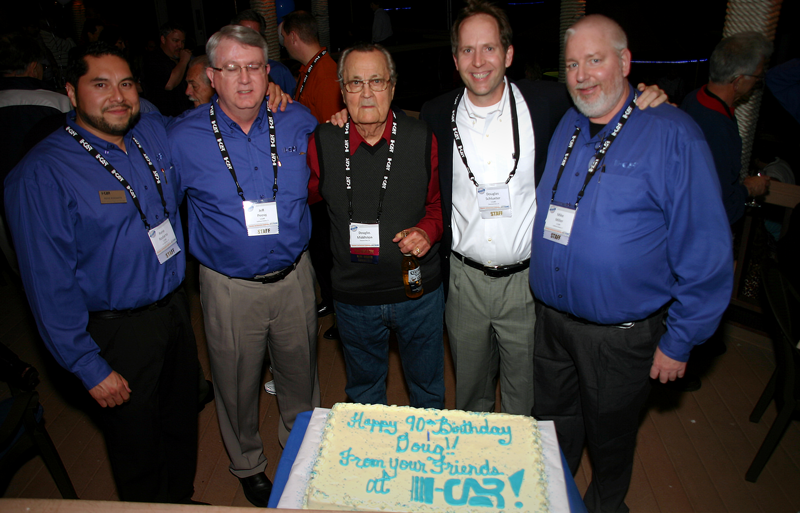 Doug Middleton, center, celebrates his 90th birthday with I-CAR staff members during a regional meeting in 2012. Middleton passed away May 19 at the age of 97.

Middleton, who had a long career in the insurance industry, was an active volunteer at I-CAR since its founding in 1979 and later served as a staff member as South Central Regional Manager for the training organization. After retiring from the staff, he continued as a volunteer for the organization for many years.

Doug completed high school and joined the Civilian Conservation Corp in May 1940. He entered active duty with the United Sates Navy on January 10, 1941. He was honorably discharged August 27, 1946. While in the Navy he served on several small radar picket boats and the Patrol Craft PC 463 in the Panama Canal Zone, the European-African zone, and Asiatic-Pacific zone. He served on the hospital ship USS Solace. He was a Signalman 2nd Class and went ashore with the Marines on Okinawa, where he was on VJ Day.

He was sent to Dickinson, North Dakota in 1944 to attend college to earn a commission. It was in Dickinson that he met and married Agnes Jeager on the 16th of September, 1944. He went from North Dakota to the Pacific where he saw the war end on Okinawa in August, 1945. He finished his second enlistment as a Signalman 1st Class and was discharged August 27, 1946.

On returning home he worked for a short time for Halliburton in the Illinois oil fields and then began a long career in the insurance industry. He joined Mid-States Insurance Company as an auto collision adjuster in St. Louis, Mo. Doug moved his family to Texas in 1948 and worked in the Dallas-Ft. Worth area eventually settling in Arlington, Texas in 1952. He left Mid-States as superintendent of claims in 1969 and went to work for USAA in San Antonio, Texas. He moved to San Antonio in 1971 and made it his home for almost fifty years. He led disaster task force teams all over the world for USAA. After retiring from USAA he became a consultant to the collision repair industry.

A funeral service was held yesterday. Condolences can be made online.