Al Porcelli, former owner of Central Avenue Collision Works in Glendale, Queens, N.Y. and a co-founder of the Auto Body Craftsman’s Guild of New York City, passed away April 7 from conditions associated with a long-life at the age of 95. Porcelli was the longest serving active trade association member in the U.S., continuing to write and edit articles for the association’s monthly publication until late last year. 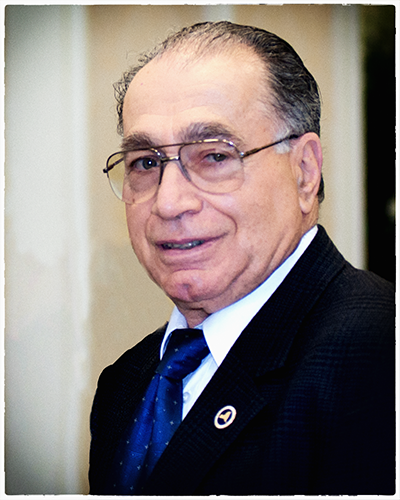 Al Porcelli, seen in this CollisionWeek file photo taken during the 2004 Northeast Leadership Meeting in Suffern, N.Y., passed away April 7 at age 95. Al was the longest serving active trade association member in the U.S.

Porcelli, son of Italian immigrants who came to America in the early 1900’s, was born in Brooklyn, N.Y. in 1924. Al began working as a young child-apprentice, sweeping floors, in the auto-electric shop next to the home where he was born, on Atlantic Avenue in Brooklyn. By the time he graduated high-school, he had mastered servicing automotive electrical, as well as all other systems. Although he wanted to enlist when Pearl Harbor was attacked, he finished school first, joined the Navy within months, and soon became a top fighter-aircraft mechanic at Pearl Harbor. His automotive experience gained him quick promotions, and by age 20 he was training other mechanics in aircraft electronics.

After four years of honorable military service, Al returned home to Brooklyn and began working at a collision shop in Queens. In 1947 he married his neighbor and childhood-sweetheart, Orrie, with whom he had three sons; Michael, Dennis, and Anthony. In 1949, with co-worker & fellow-veteran, Henry Keller, Al opened Central Avenue Collision Works, in a 2-car garage in Glendale, Queens. Through their hard work, the business grew rapidly, and within five years moved to a much larger, fully-equipped facility, across the street from their humble beginning. They were always viewed by their peers as the best partners in the business, who produced the highest quality work for over 25 years until Henry’s retirement.

Three years later, Al’s oldest son Mike, who worked in the shop learning the trade from age-5, became Al’s new partner. Together they continued their tradition of quality work and consumer-advocacy, expanding the business until Al’s retirement in 1990.

Al and 11 other local collision repair shop owners, known as the “dirty-dozen” because they did the hard work, formed one of the earliest collision trade associations; the Auto Body Craftsmen’s Guild of New York City, which promoted the interests of shop owners, workers, and consumers alike.

Since its inception, Al held every leadership position in the organization, and was very proud of his service as a chairman of the education-committee, and as the longest-surviving Guild-founder. For over 60 years, Al and the Guild advocated for better trade-education in public school systems, and within the industry. He became State-Chairman of I-CAR for several years, held classes in his shop, lobbied tirelessly for improving education at all levels, and was an early promoter of ASE-testing. In their early years, Al operated an ASE testing-site at the Guild’s office in Glendale, and encouraged all Guild members to become certified. He was also actively involved in educating government officials, at every level, on vehicle-safety, trade-education, and consumer protection issues.

For years, Al served on many industry & government advisory-boards, mostly at his own expense, and testified at countless hearings advising Government on improving: consumer-protection, worker-protection, and trade-education. As a dedicated industry-advocate, Al was a leading force contributing much time and effort to many, State and National, Collision Trade Associations. His greatest regret was that he did not witness the implementation of the Justice Department’s 1963 Consent Decree, prohibiting insurance company interference in the collision industry. Al was instrumental in the case that produced the Consent Decree, and worked tirelessly, often alone, to get the Justice Department to enforce it. He died hoping that it will be enforced.

Since his retirement, until the end of last year, Al was actively working as editor of the Guild’s magazine, the “Bulletin,” for which he wrote hundreds of articles on vehicle-safety, repair-procedures, consumer-protection, business-practices, and trade-education. He was a self-taught researcher and author; whose presentations were on par with any professor.