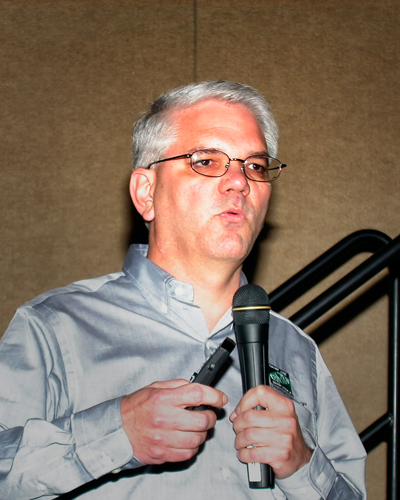 Ron Ray, former executive director of the Collision Repair Education Foundation, is seen in this CollisionWeek file photo during a presenting at the March 2002 Collision Industry Conference. Ray passed away March 28.

The fund will support the collision students and schools that Ron supported throughout his career.

Industry members interested in making a contribution to the Ron Ray Memorial Fund can donate online by choosing the memorial fund in the dropdown of the online donation form.

Prior to working for the Collision Repair Education Foundation, Ron worked at Porsche Cars NA and American Honda. After his tenure at CREF, he continued his career at I-CAR for the Education segment and then as an instructor at Lincoln Tech-Nashville prior to retirement.

“Ron was instrumental in making CREF the great organization it is today,” said Clark Plucinski, Collision Repair Education Foundation Executive Director. “Given his passion for collision education, Ron would be gratified to know that so many of the schools and students he cared about are being assisted in his memory. He will be missed by so many in the industry, and I was honored to call him a colleague and a friend.”

Gwen Ray, Ron’s wife, reflected on Ron’s achievements, “Ron had a passion for what he did, whether it was working for OEM or teaching. He wanted to make a difference; that is what was most important to him. Over the eight years he taught at Lincoln Tech, he had received several letters from students and that was his reward. He loved what he did-period.”

The Foundation also encourages any industry members to submit stories and photos of Ron from throughout his career. The Foundation will post the stories and pictures on its website. All photos and stories can be sent to info@ed-foundation.org.