The Collision Industry Foundation (CIF) announced that the first-ever CIF Distinguished Service Award was presented to long-time Board member, Bill Shaw from PPG, at the SEMA Red Carpet awards breakfast on November 6. The award was created to highlight an individual’s exceptional efforts in support of the CIF mission and vision. 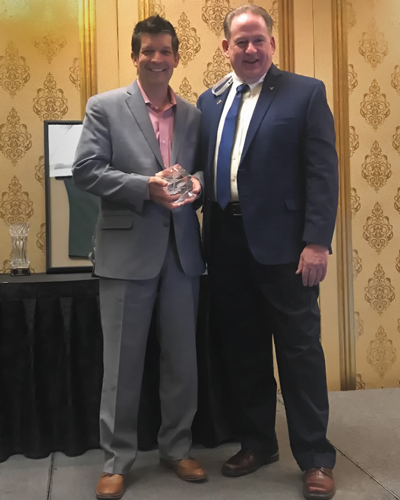 Shaw joined the CIF Board as a Trustee in 2008, served as Board Vice President in 2009 – 2010, and was appointed to the position of Board President in 2011, serving in this role for the next nine years and working diligently to provide assistance to industry families in need of assistance, particularly after natural disasters or other catastrophic events.

Shaw has been a tireless promoter of the CIF mission, demonstrating a selfless commitment to the cause, spending countless hundreds, or perhaps thousands, of hours over the past 12 years working with donors, recipients, and helping to drive awareness of CIF. He personally reviewed countless assistance requests and talked to dozens of those impacted by flooding, fires and hurricanes including Katrina, Irma and Harvey. He coordinated efforts to support hundreds of individuals across our industry, and he helped to establish a sustainable CIF fund with enough money in reserve to help those in need.

In order to increase the fundraising opportunities, Shaw creatively moved the annual CIF fundraiser gala to Palm Springs in conjunction with CIC in 2014. He also led the Trustees in leaving something behind, so it was not uncommon to see the Trustees volunteering during the meetings at local food banks. He was passionate about spreading the word about CIF and wanted to make sure that all collision repair professionals know CIF is there for them in a time of need.

The Collision Industry Foundation Board of Trustees extends their deep gratitude to Bill Shaw for his enduring support over the years.