The U.S. Department of Transportation’s National Highway Traffic Safety Administration released highway crash fatality data for 2018, showing a 2.4 percent decline in overall fatalities, the second consecutive year of reduced crash fatalities. Under this Administration and Secretary Chao’s leadership, the USDOT has focused on safety as its top priority. 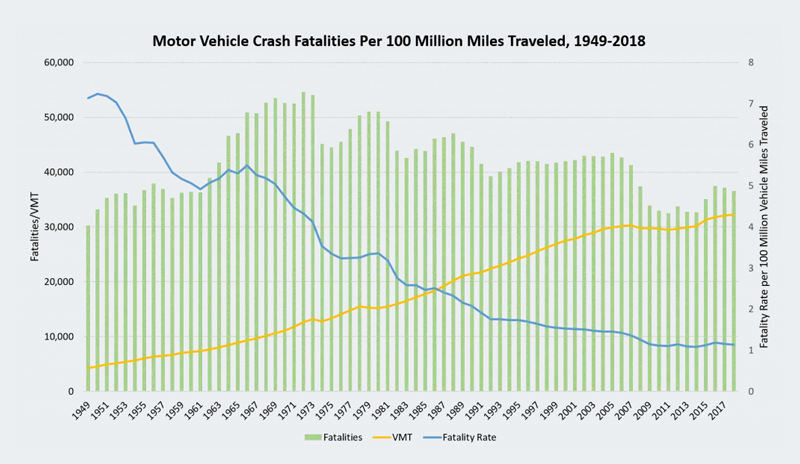 “This is encouraging news, but still far too many perished or were injured, and nearly all crashes are preventable, so much more work remains to be done to make America’s roads safer for everyone,” U.S. Transportation Secretary Elaine L. Chao said.

Other findings from the 2018 FARS data include:

“New vehicles are safer than older ones and when crashes occur, more new vehicles are equipped with advanced technologies that prevent or reduce the severity of crashes,” NHTSA Acting Administrator James Owens said. “NHTSA has spent recent years partnering with state and local governments and safety advocates to urge the public to never drive impaired or distracted, to avoid excessive speed, and to always buckle up.”

In addition to the 2018 numbers, NHTSA also released initial estimates for the first half of 2019, which suggest that this overall positive trend may be continuing.

The estimated number of fatalities in the first half of 2019 declined by 3.4 percent from the same period in 2018, with 589 fewer fatalities over that time. That translates to an estimated first-half 2019 fatality rate of 1.06, the lowest first-half level since 2015. The estimates for the second quarter of 2019 represent the seventh-consecutive year-over-year quarterly decline in fatalities, starting in the last quarter of 2017.

“Safety is a shared responsibility, and we are committed to working with all stakeholders to develop a shared vision for the future that further enhances safety benefits for consumers,” said the Alliance of Automobile Manufacturers in a statement. “NHTSA’s research tells us that driver behavior plays a role in more than nine out of every ten crashes (94 percent).  That is why driver assist technologies on the road today, like blind spot monitoring and automatic emergency braking, can be effective in helping to improve roadway safety.  Automakers are deploying potentially life-saving innovations now, which is why it’s critical to have smart policies that help get new, proven, safety technologies to customers.  Deployment of these potentially life-saving technologies is expanding rapidly; nearly half of all vehicles sold in model year 2018 had collision warning, collision mitigation, and blind spot monitoring installed.”