You are here: Home / News / California Insurance Commissioner Now Under Fire Over Use of Public Funds for Housing

California Insurance Commissioner Ricardo Lara who apologized last week for taking reelection campaign donations from insurance industry executives and their families is under the spotlight again. Following a report in Politico that Insurance Commissioner Lara billed the state for his Sacramento apartment,  a consumer group has called on California officials to investigate to determine the legality of the payments. 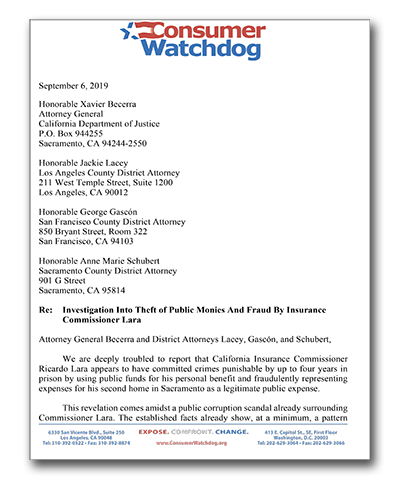 Consumer Watchdog has called on California Attorney General Xavier Becerra and the District Attorneys for Sacramento, Los Angeles and San Francisco counties to launch an investigation over concerns it sees with potential theft of public funds outlined in the Politico report.