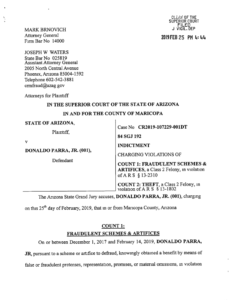 The indictment, filed February 25, arises out of an investigation conducted by the Mesa Police Department.  The allegations came to the attention of police when employees of a bank noticed the elderly victim appeared nervous and stressed while withdrawing money from her bank account.

According to a report by Arizona’s ABC 15 television station, Parra, who operates an auto body shop in Mesa,