While changing technology is a longer-term disruptive threat, rate increases will drive growth in the near term, according to S&P Global Market Intelligence report

Auto insurance has accounted for more of the U.S. property and casualty (P&C) industry’s premium volume in recent years, with several rounds of loss-fueled rate increases accelerating premium volumes in the short term, accordingly to S&P Global Market Intelligence’s 2018 US Auto Insurance Market Report. Developments such as ride-sharing, the emergence of autonomous vehicle technologies and the introduction of new insurance pricing models threaten varying degrees of disruption to a sector that has historically accounted for the largest segment of overall P&C insurance premium volume. 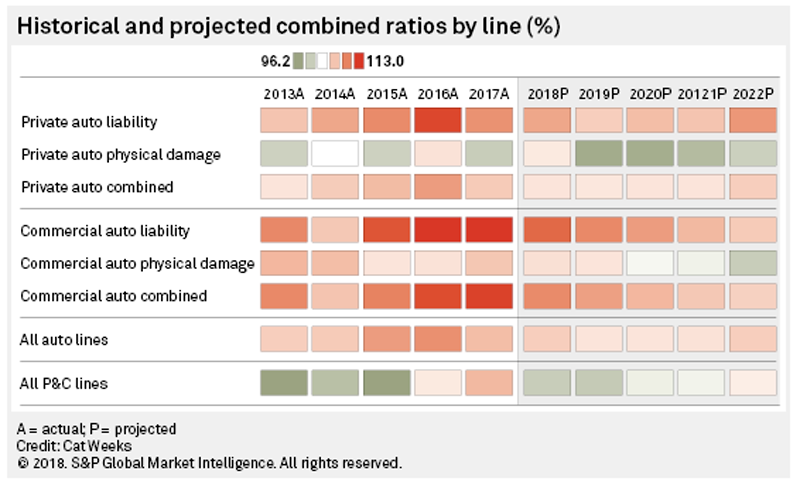 The rate of growth on combined personal and commercial auto direct premiums written is projected to pull back to 6.4 percent in 2018 and even lower through the subsequent four years from the 15-year high of nearly 8 percent in 2017.

The auto insurance industry’s financial results are projected to reflect the impact of corrective actions taken to address surprise spikes in the frequency and severity of claims, which had the effects of pushing losses in 2016 and 2017 to their highest levels since the start of the century.

As CollisionWeek published yesterday in an analysis of insurance industry data covering the first quarter of 2018, claims and losses have increased substantially in recent years.

For the personal auto business, S&P Global Market Intelligence projects growth in direct premiums written will slow to 6.3 percent in 2018 from 7.8 percent in 2017. Meanwhile, the projected 2018 growth rate for commercial auto direct premiums written is even higher at 7.3 percent, but it also lags the expansion of more than 8.8 percent that the industry achieved in 2017. The projected 2018 growth rate is well in excess of the 4.1 percent pace of expansion projected for the U.S. P&C industry as a whole, according to S&P Global Market Intelligence.

Additional findings from the 2018 US Auto Insurance Market Report include:

In personal auto, the net incurred loss ratio declined to 67.9 percent in 2017 from 2016’s 15-year high of 70.3 percent, highlighted by almost 7.2 percentage points of improvement for the State Farm group. The highest net incurred loss ratio in the business line among the top 25 carriers was 79.5 percent for the group led by United Services Automobile Association, which experienced a second consecutive year of historically high catastrophe losses.

After a 2016 in which the group’s results were negatively impacted by significant hail storms in geographies where it had high concentrations of policyholders, USAA was hit particularly hard in 2017 by hurricanes Harvey and Irma as well as the fourth-quarter California wildfires. The USAA group obtained more than 13 percent of its 2017 private auto direct premiums written from Texas, the state most dramatically impacted by Harvey, relative to 8.9 percent for the rest of the U.S. P&C industry.

More broadly, lower gas prices triggered a sharp increase in the number of miles driven beginning in 2015 and, in turn, fueled a higher level of claims frequency for auto insurers. Distracted driving as more Americans purchased smartphones also contributed. The rising number of accidents and the increased level of sophistication required to repair newer vehicles then contributed to increases in the severity of claims.

With several carriers voicing optimism about improvement in claims trends, S&P Global Market Intelligence projects a net incurred loss ratio of 66.6 percent for the personal auto business in 2018, with the ratio leveling off at a projected 65.8 percent in 2019. Each of those results would mark the industry’s lowest personal auto net incurred loss ratios since 2014, and they would facilitate combined ratios of just above break-even.

A high level summary of the report is available online.