The Insurance Institute for Highway Safety and the Highway Loss Data Institute announced that Dr. David L. Harkey will become the next president of the two traffic safety research organizations in January 2018. Harkey will succeed Dr. Adrian K. Lund, who is retiring after serving as IIHS-HLDI president since 2006. 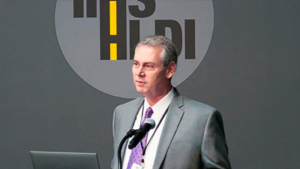 Dr. David L. Harkey, shown speaking at a roundtable on truck underride hosted by IIHS on Aug. 29, has been named the new president of IIHS and HLDI.

Harkey, 54, has directed the University of North Carolina Highway Safety Research Center since 2006 and has more than 30 years’ experience