Federal Judge grants request for preliminary injunction that delays the December 1 expansion of overtime eligibility. Rule presumed dead in its current form given change in Administration in January.

On November 22, Federal Judge Amos L. Mazzant granted the request of plaintiffs for a preliminary injunction delaying the implementation of the U.S. Department of Labor’s new overtime rule. The ruling was made in the case brought by Attorneys General in a 21-state coalition lawsuit seeking to overturn the rule that was originally scheduled to take effect on this Thursday, December 1. 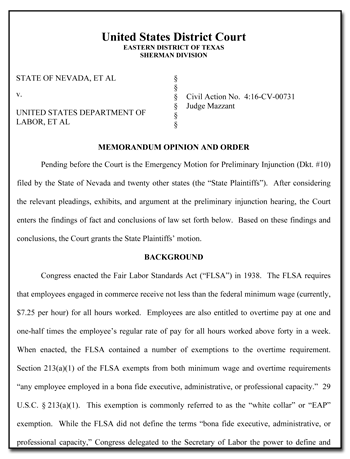 The rule was challenged in a lawsuit filed in