Fatal crashes involving drivers who recently used marijuana doubled in Washington after the state legalized the drug, according to the latest research by the AAA Foundation for Traffic Safety. New research also shows that legal limits for marijuana and driving are arbitrary and unsupported by science, which could result in unsafe motorists going free and others being wrongfully convicted for impaired driving. Washington was one of the first two states to legalize the recreational use of marijuana, and these findings raise serious concerns about drug-impaired driving with at least 20 states considering marijuana legalization this year. 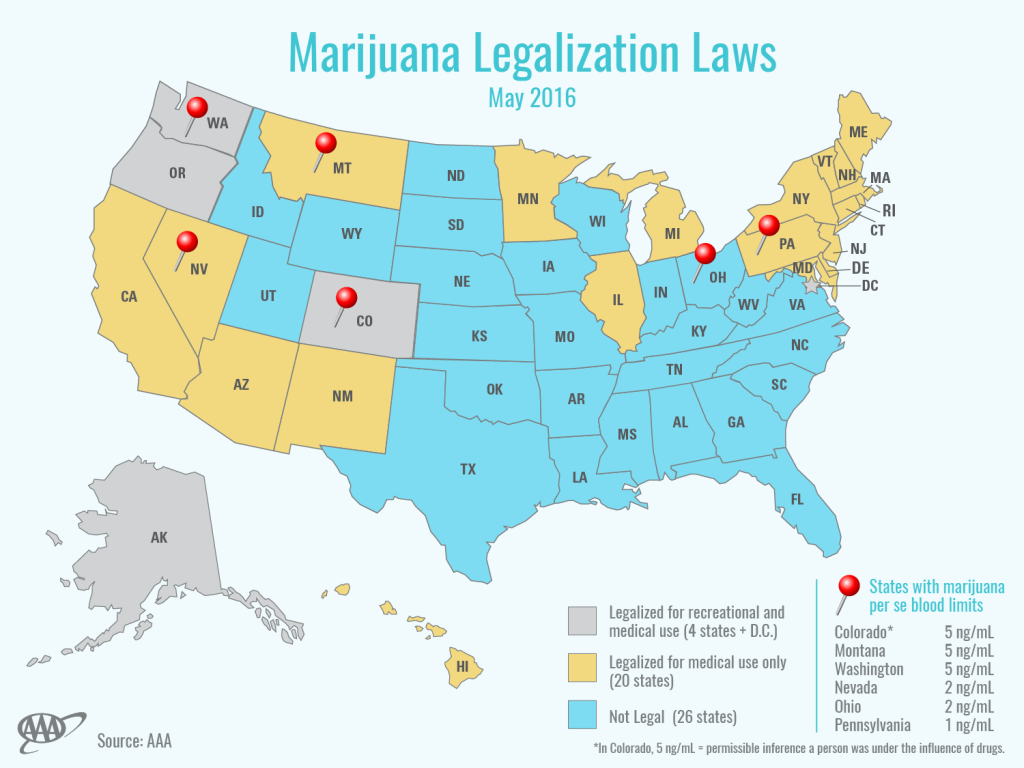 The Foundation examined drug tests and fatal crashes among drivers in Washington, a state that legalized marijuana in December 2012. The researchers found:

The percentage of drivers involved in fatal crashes who recently used marijuana more than doubled from eight to 17 percent between 2013 and 2014.
One in six drivers involved in fatal crashes in 2014 had recently used marijuana, which is the most recent data available.
“The significant increase in fatal crashes involving marijuana is alarming,” said Peter Kissinger, President and CEO of the AAA Foundation for Traffic Safety. “Washington serves as an eye-opening case study for what other states may experience with road safety after legalizing the drug.”

AAA is urging states to use more comprehensive enforcement measures to improve road safety. Rather than relying on arbitrary legal limits for the level of THC, the active ingredient in marijuana, in the blood that the Foundation believes have no scientific basis, states should use a two-component system that requires:

“Marijuana can affect driver safety by impairing vehicle control and judgment,” continued Doney. “States need consistent, strong and fair enforcement measures to ensure that the increased use of marijuana does not impact road safety.”

Whether the use of marijuana is legal or not, all motorists should avoid driving while impaired. Just because a drug is legal does not mean it is safe to use while operating a motor vehicle. Drivers who get behind the wheel while impaired put themselves and others on the road at risk.

Four states, including Alaska, Colorado, Oregon, Washington and Washington, D.C., have legalized the recreational use of marijuana, and 20 states have legalized it for therapeutic and medicinal use. Montana and Washington have implemented a per se limit for marijuana at 5 ng/mL; Nevada and Ohio have set a limit at 2 ng/mL; and Pennsylvania’s is set at 1 ng/mL. Twelve states have strict per se laws that forbid the presence of any levels of marijuana. In Colorado, a blood concentration of 5 ng/mL or more gives rise to permissible inference that a person was driving under the influence of the drug.